Showing posts from December, 2005
Show all

By Joshua Bell - 12:54 PM
We were in Claresholm this morning to visit my grandparents, staying at a motel. We came awake at a reasonable hour and flipped on the TV to see if there was anything for Caspian to watch while we finished waking up. The kids shows in the offing weren't good choices at that point, but an episode of Star Trek (The Original Series) was on. ( "Miri" , for those taking notes, but it's not relevant to the story.) It's on for a minute, and the landing party - Kirk, Spock, McCoy, Rand, and two redshirts - beams down to investigate. When we first get a good look at the crew, Caspian immediately says: "That's the guy that sings the Bilbo song!" Caspian is a big fan of The Hobbit and whenever we're on a car ride (no matter how short!) he asks us to tell him the story again. At one point, on a lark, I showed him the video of Leonard Nimoy singing "The Ballad of Bilbo Baggins". Made a big impression, apparently.
Post a Comment
Read more

By Joshua Bell - 8:01 AM
It would be fairly accurate to describe my years in High School and University as a balance between sleeping through class, writing code ( Apple II projects, MUSH code , and so on), and haunting used bookstores. As an example, for High School english classes I typically wrote computer games - for Dune , a thumper-placement/avoid the worm action game. For King Lear , a "choose your own adventure" game. I picked up a tattered, second-hand copy of Destination: Void as a teenager while on a Frank Herbert binge. It was only years later that I learned that there was a sequel (by Herbert and Bill Ransom ), The Jesus Incident . As a rather religion-averse person I had never picked it up and flipped through it - the name put me off. Flash forward to 2004. I'm a little bit obsessed with Halo - not playing the game, mind you, just the beautiful game world. See previous entries about Iain M. Banks - they cribbed massively from his writing. The Halo itself is an Orbital (mini-ringw
Post a Comment
Read more

By Joshua Bell - 8:01 AM
I was thinking about whether a team decision had left me a little disillusioned about the team's direction. And then I thought, "well, I guess I need to get re... um... re-illusioned?" It’s been observed for a long time that we only get by in this world by subscribing to a consensual illusion about How Things Are, even if most of the time we are oblivious to this. What surprised me is that this concept is integrated into our vocabulary in such a common word.
Post a Comment
Read more

By Joshua Bell - 4:59 AM
USA Today (!) has an article up about offloading long-term memory storage into services like Google: USATODAY.com - This is the Google side of your brain The article is intelligently written and while it does lean on the journalistic crutch of controversy ("A claims X, but B disagrees, saying ...") it remains remakably upbeat about the gradual shift of our notion of self to incorporate technology that's been going on for millions of years, ever since we first learned to build tools.
Post a Comment
Read more

This Week's Finds in Mathematical Physics

By Joshua Bell - 3:00 AM
I hadn't checked out John Baez 's " This Week's Finds... " in a while. and when I do, what do I discover in the second-to-most-recent issue? A review of Accelerando   and brief discussion of Singularity fiction. John's been writing an emminently digestable (almost) weekly summary of what's going on for many years now, long before blogs were popular. If I had more of a rigorously analytical brain, mathematical physics is the field I'd want to be in. This is the field where the Deep Understanding of our universe and the relationship between logic, mathematics and our little slice of reality are being figured out. I have my fingers crossed for Caspian.
Post a Comment
Read more

Review of The Chronicles of Narnia: The Lion, The Witch and the Wardrobe, The Movie

By Joshua Bell - 8:51 AM
Pretty good. If you can make it through the first half, the second half makes up for it. I enjoyed it a lot, and hopefully they'll follow on with Prince Caspian and Voyage of the Dawn Treader . Adapting the others will be a tremendous challenge. This one was adapted spectacularly well. I have two major criticisms of the film. First, the first half of the film (through the Father Christmas scene), the directing, acting, and cinematography is emotionless. At no point does the White Witch come across as sinister, vile, or oppressive. In the inevitable comparison to Peter Jackson's Lord of the Rings , Jackson's characters were a little bit over the top. In this adaptation, the characters weren't even at base camp yet. Jadis should have terrified us at least as much as the Nazgul did in Fellowship ; Maugrim's pack are turned into buffoons. This all turns around halfway through, but that just makes the film feel uneven. Second, the film was simply too short. One of m
Post a Comment
Read more

By Joshua Bell - 8:21 AM
This one is a few weeks old; Susan just related it to me. It seems she and Caspian were in the garage putting a load of laundry in and Caspian was being a bit of a twit. Su needed a way to distract him and she noticed a small flip-open mirror sitting near the dryer. She discretely pocketed it, and told Caspian he'd get a surprise when they went inside if they behaved. Upon going inside he asked for the surprise, and she gave him the mirror. His reply: "That's not a very good surprise." Can't put anything over on him.
Post a Comment
Read more

By Joshua Bell - 2:00 AM
Continuing the "gray goo in an artificial reality" discussion. So what are the scarce resources in a computational substrate? These will be the points of competition. Plan ahead, since competition will be fierce! Computational cycles will be an obvious one. Thinking back on Stross' Accelerando and the constant mentions of computronium, I realize there's a lot of implied protocols in place. Rogue code isn't sucking up the cycles to the point where the protagonists starve, so something is enforcing a degree of timesharing, or authentication. Presumably there are layers upon layers of negotiating protocols. I can imagine squirting you an expert negotiator that is given a fixed number of computations to convince your expert negotiator that you should lend me some CPU cycles. Rogue consumers of computational cycles might be termed "cyclovores" or some other catchy name. What else is scarce? What entities might make use of these ecological niches? Cycles -
Post a Comment
Read more 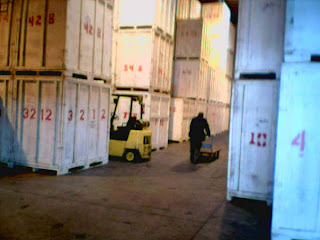 When moving last year we relegated a lot of our stuff to some storage containers at a local facility. We recently put together a list of some things we wanted out of storage and several additional boxes to put into storage, so we made a trip to "visit" our boxes. The trip was successful, and Caspian is now stoked with several additional Star Wars toys, and an old Macintosh SE in his work area that's entirely his. After we finished, I was putting away a cart and realized I was in a scene from Indiana Jones. Thanks to a poor quality camera phone, I get to keep the memory... in a blurry and poorly lit sort-of way.
Post a Comment
Read more

By Joshua Bell - 6:40 AM
One of the deeper thoughts coming out of the "Gray Goo in Second Life" incident is a reminder: Baseline human intellects are not native to virtual realities. I think there's an argument that any substrate rich enough to support computation and replication and has a sufficient degree of error can host life which will evolve. For us, the laws of physics provide computation (particles interact), replication (via RNA, later DNA/RNA/Proteins) and error (DNA replication has good but not perfect error correction). Left on its own, an artificial environment like Second Life would be overrun by replicators which are "native" to the environment. Yes, someone has to create them maliciously - for now - but bugs and eventually real errors would creep in over the millenia. Like a replicator in Core War (see the FAQ ) you can have extremely efficient creatures dominate the substrate very quickly. Consider one possible start for life on Earth - the "clay substrate"
Post a Comment
Read more

Where do babies come from?

By Joshua Bell - 6:22 AM
Caspian told Susan this story the other day, and it was so good she wrote it down. "I can make babies all by myself. First I get an egg then I tape it shut then I swallow it to put it in my tummy. This makes my egg baby starts to be a baby, then it pops out and I can take the tape out and I crack it open and then I see her! It becomes a baby sister." The entertainment never stops. :)
Post a Comment
Read more

Gray Goo - It's not just nanotech

By Joshua Bell - 8:31 AM
My friend Sarah alerted me to an attempted grey goo takeover of Second Life: http://www.joystiq.com/entry/1234000597070455/ Second Life is a blend between TinyMUDs (online text-based virtual worlds that allowed users within the game to create new objects, including scripted behavior in descendants) and a modern MMORPG (Everquest, World of Warcraft, etc). I haven't played (I love my family) but I've been thinking about the problem space for 15 years or so. Basically, someone made a object that replicated itself and took over large parts of the world's geography and sucked down CPU cycles. It’s interesting to think about tweaks to the laws-of-physics in the game that would prevent such a thing. I realize that’s not the approach they took – and applaud their attempt not to – but I think there is justification for considering changes to the fundamental behavior of a world that makes such things harder. (Caveat: I have no idea what the physical laws of SL are, but it's ap
Post a Comment
Read more

By Joshua Bell - 5:07 AM
I finally tracked down an aphorism that's been stuck in my brain for a while: "All problems in computer science can be solved by another level of indirection." (I was having a hard time tracking it down as I'd heard the version with "abstraction" substitutued for "indirection".) It was stated by some guy I hadn't heard of named Butler Lampson , who it turns out (1) is wickedly smart, (2) was amazingly influential (e.g. the Xerox Alto) and (3) also works at Microsoft now (over in MSR). I recall that when I first heard it I was taken aback, possibly having worked on one too many projects that got horribly bogged down in trying to be too abstract and failing to deliver anything concrete. Now, however, I'm seeing it as part of the innovation race. The more levels of abstraction you have the more nimble you are and the more you enable that you hadn't thought of. If you're not adding levels of abstraction and flexibility to a project,
Post a Comment
Read more
More posts