Showing posts from December, 2008
Show all

By Joshua Bell - 9:24 AM
A few years ago, Susan came home with a Zune for Caspian's music playing needs. (This followed a Creative Zen that lasted a few years then went to silicon heaven , and an iPod that lasted about 1 day before Su's patience ran out - Apple UI just rubs her the wrong way.) A Zune? Well... I bit my tongue. Microsoft has done some good hardware from time to time, after all (keyboards, mice, I even liked the routers). Today at around 8am, Caspian shouted down that it was just showing a line, and not starting. We tried running down the battery and recharging, but no change. Just now I was reading my blogs, and Slashdot reported that we weren't alone . Apparently, today is Y2K8 Global Meltdown day for Zunes . The leading speculation is that the Zunes have a leap-day bug - today is the 366th day of the year, which may trip some bug when the firmware reads the hardware clock value. Hopefully, tomorrow the Zunes will rise from the grave ... and not be craving tasty brains .
Post a Comment
Read more

By Joshua Bell - 4:26 PM
Su and I just watched The Prestige . Nice little flick. Summary: Su says, " Great, but the title roles should be switched. " She also heavily implied " Oh, and Hugh Jackman is yummy, " but denies actually saying it.
1 comment
Read more

By Joshua Bell - 9:12 AM
I'm not the only one who can't get over the position of the "M" key on Verizon's version of the HTC Touch Pro. From InfoSync : The keyboard, as we've mentioned, is odd. We just can't get over that dangling "M," and even if we could get used to it, we're not sure we want to. Otherwise, Verizon Wireless keeps things simple. The keyboard has a nice, solid feel to it, with soft keys that each have their own rounded tops. You get quick access to the messaging app via a key on the keyboard, and it's the only real dedicated hardware key on the device. Still, that "M" is just standing there all by itself, staring at us. Italics added.
Post a Comment
Read more 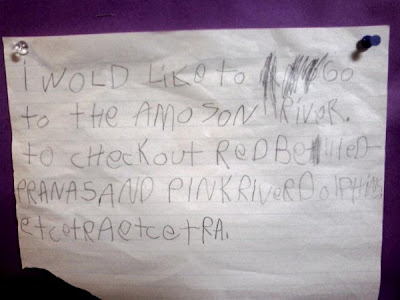 A paper Caspian wrote for school: I wold like to go to the amoson river. to check out red bellied- pranas and pink river dolphins etcetra etcetra
Post a Comment
Read more

It's okay to hate

By Joshua Bell - 1:54 PM
In contemporary society, it's unacceptable to portray any particular group of people as fundamentally evil in mainstream movies. No matter how noble the hero, he or she can't go around mowing down the antagonists with a machine gun because they can't be that bad . Perhaps this goes too far, too "P.C." in some contexts, but the respect we've achieved for other groups of humans (which admittedly may waver from time to time) still points to this being a pretty darn empathic apex in our checkered history. But there are two exceptions - two groups of people who it is acceptable to loathe, revile... even outright hate. Nazis Zombies This movie, therefore, is perfect: +1 point for the Evil Dead reference. +1 for the Indiana Jones reference. Dead Snow (a.k.a. Død Snø). Check it out. c/o Twitch and Via IO9 . But if we're talking about inhuman monsters, then surely invaders from space count too? Iron Sky - pulpy art deco in space. Evil art dec
Post a Comment
Read more