Showing posts from October, 2005
Show all 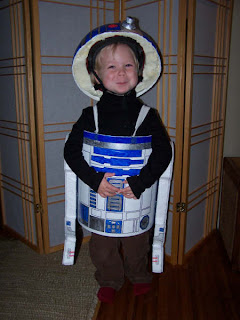 Great success! Caspian loved his costume and enjoyed Trick-or-Treating at Microsoft, but he pooped out on the drive home and didn't do the "Candy, candy, candy!" thing when we back to our 'hood. Instead, he took a nap then watched some Nosferatu in our driveway in the rain. What we do, you see, is set up our DVD player and projector in the garage, hang a sheet, and rear-project a horror movie onto it. Two years ago we did The Beginning Of The End  (a Burt I. Gordon film with giant locusts attacking scenic postcards); last year we did the Ed Wood film Plan 9 From Outer Space (which isn't as bad as they say!) This year, the silent classic Nosferatu with a great new orchestral score.
1 comment
Read more

By Joshua Bell - 2:24 PM
Caspian had asked for an R2-D2 costume for Halloween. No, he hasn't seen Star Wars yet. Maybe when he's 4, which is how old I was when I saw it. He does have some toys, though - under the Playskool "Galactic Heros" brand, Hasbro has some 3-and-up toys aimed to suck 'em in early. Plus, his friend Julian was going to be Darth Vader. (If you knew him...) Anyway, so this has led to many nights of arts & crafts in the Bell household. We have impecable timing - finishing the night before the project was due, as always. At least we didn't start the night before. Once the costume was complete, I took some photos. As Susan quipped, "before it can be damaged by the intended user?" A brief materials list: 12" concrete form tube, for the body 1.5" think styrofoam insulation for the bulk of the legs 0.25" foam-core board, for the leg surfaces Plaster mask-making kit, for the head dome (done on a balloon) Old bicycle helmet Expanding foa
Post a Comment
Read more

By Joshua Bell - 2:34 AM
Keeping this for reference, in case I ever need it. It's also a great look at Things To Come. Wired 13.11: My Bionic Quest for Boléro Relevant quote: An audiologist plugged my processor into her laptop and uploaded the new code. I suddenly had a better ear, without surgery.
Post a Comment
Read more

By Joshua Bell - 9:57 AM
I've changed my blog title from "Two meals, 50 years" to "Caution: Singularity Ahead". The old title was perhaps too obscure, and/or depressing. The new title mirrors my (custom) license plate frame. For the search engines: Washington License Plate UPLOAD Caution Singularity Ahead (Stopped in traffic, I saw a Microsoftie take a camera-phone picture of my license plate/frame. I figure someone might go searching for it.)
Post a Comment
Read more

By Joshua Bell - 9:54 AM
Just started and finished Accelerando by Charles Stross on a flight from Seattle to Orlando. Great stuff. Can't say I was fond of the Pamela character, but that's the point. Hints of Egan (uploads in a can) and Wright (stuffy neo-Victorian transhumans), but definitely Stross' welcome character-driven SF. Fun quotes - all within a few pages of each other: "To boldly go where no uploaded metahuman colony has gone before." This point in the novel captures my "contingency plan" paranoid thinking well - the last remnants of recognizable humanity are likely to be those that upload and surf the wave of the singularity away at near-c. "We carry the seeds of a singularity with us wherever we go, and if we try and excise those seeds, we cease to be human." Something I've tried to capture in this blog. Humanity's attractors are extinction and a singularity. We either embrace one or the other, sacrifice our humanity, or seek to remain chaotic for
Post a Comment
Read more

By Joshua Bell - 2:13 PM
I noticed that, even with a Microsoftie crowd, there was a bit of a hushed skepticism when a certain point was reached when Kurzweil was discussing a trend. For example, computer speeds, or neural simulation. Put another way - even with a generally receptive audience, there's a point where predictions seem to ring a little untrue. I think that corresponds to the "knee point". In other words, the audience can grasp the linear trend, but when the exponential factor takes over it's harder to believe. What might make this easier is to buffer the notion of exponential growth a bit more - Kurzweil certainly showed a lot of nice slides of historical, exponential trends - and go through the record of how this has "felt" to those experiencing the growth. In other words, we shouldn't be skeptical of XXXX because (a) we can show the trend and (b) this is exactly like what happened with YYYY. ... Also, when driving home, I figured out the question I should have
Post a Comment
Read more

By Joshua Bell - 11:10 AM
Ray Kurzweil stopped by Microsoft to give a talk on " The Singularity is Near ". Obviously good stuff. He spent too long pointing out progression on logarithmic graphs, though. I think the MSFT audience got the picture. He mentioned early on in the talk that people don't often see exponential growth until a "knee point". In the attached "linear-exponential1" graph, this occurs at about point 9 on the x-axis - when everyone wakes up and says "hey, this wasn't linear after all". One thing he didn't mention (although he hinted at it when talking about boom-bust cycles) is how the nature of the exponential growth curve can breed skepticism in its very existence. Take a look at the second graph, "linear-exponential2" which is the same data, just looking at a shorter time scale. Here's the scenario: a new technology emerges, and the proponents predict growth. They may be aggressive and predict exponential growth, but
Post a Comment
Read more

By Joshua Bell - 3:00 AM
Like always, this will require some explanation: "Don't cook me!" Susan's parents are in town and so grandma was helping get Caspian ready for bed in his bedroom. I knew what was coming so I was cleaning up the house, but keeping an ear open. I suspect it was when they were trying to put his pajama shirt on, and something when awry. I heard laughter, then from a grown up: "You know, to many cooks." Caspian: "Why did you say cooks?" Grown up: "It's something you say... if you have too many cooks cooking something it can go wrong." Caspian: "Don't cook me!"
Post a Comment
Read more
More posts