Showing posts from December, 2006
Show all

Retrocomputing - Mechwarrior for the Apple II 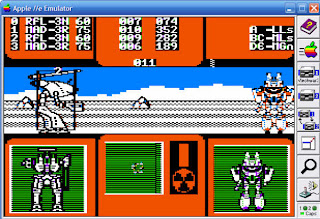 Another project that sat dormant for a while - almost 20 years in this case. This is the basic core of an Apple II game based on Mechwarrior (giant fighting robot suits). It was probably inspired, more than anything, by the box art for a PC version of this game . I'm rather proud of the sprites! I started when I was a teenager and got the basic image blitting and background rendering working and drew up lots of lovely sprites. But the whole thing was tied together with Applesoft BASIC code and was dog slow (like 0.1Hz). When I first (re) moved to San Francisco I spent some time rewriting the core of it in C using CC65  and making the blt engine a lot more flexible and speeding it up too. It's still pretty slow (2Hz or so) but there are plenty of optimizations that can be made: all sprites are 10 bytes wide, for example, and sprites are cached in aux memory which means a double copy when rendering. This is way, way down on the priority list to finish. (Correlate this
Post a Comment
Read more

By Joshua Bell - 3:48 AM
As mentioned here I created a PCX file type plugin for Paint.NET In response to a request from a user who needed to preserve the palette during load/save cycles (some downstream process required that the palette remain fixed) I updated the code and save dialog with a new checkbox: Use original palette . If checked, and if the document was originally loaded as a PCX (or as a PCX and saved as a PDN file, I think) then it will re-save using the original palette.
Post a Comment
Read more

By Joshua Bell - 3:40 PM
So one of my hobby projects that I've been putting an average of about two hours a month into for the past 5 years is a Pocket PC first person shooter that grew out of a voxel terrain demo I put together in Java about 10 years ago. When 2002 rolled around I had been playing Halo (on an Xbox at work) and fell in love with the visual design. So morphed the terrain demo - very slowly - into a "Pocket Halo" (later renamed "Halo Mobile"). (It's something I'll never finish, since it borrows all of the media from the game, soundtrack CD, and other fan projects (e.g. Halathon ) and I'm sure Microsoft/Bungie wouldn't be huge fans of it. When I was working at Microsoft I showed it off to a few people, but I didn't give out copies. Please don't ask.) Doing it on a Pocket PC (~300MHz ARM processor, ~32MB memory, 240x320 screen, no hardware 3D, no floating point unit) gives it a bit of a retrocomputing aspect as well. (To be fair, it also compiles f
Post a Comment
Read more

Quotes milling about in my head lately.

By Joshua Bell - 1:28 PM
These two quotes have been stuck in my head: "Once a king or queen in Narnia, always a king or queen."  - The Lion, the Witch and the Wardrobe, p.148 "If you could make a starship at the push of a button, you wouldn't need to..."  - Star Trek: The Next Generation Technical Manual, p.17 I think this is hinting at some deep need for control and/or power within - and yet dissociation from - virtual worlds.
Post a Comment
Read more

By Joshua Bell - 3:08 PM
First, two old ones: Regarding Captain Jack from Pirates of the Caribbean: Susan: "Pirates are bad. But he's good at heart." Caspian: "Yeah. But bad at head." Playing the yummy/yucky game: Caspian: "Snake soup is yucky! But eel soup is good - it's unagi!" And today: Caspian: "Santa brings bad guys coal and light switches."
Post a Comment
Read more

By Joshua Bell - 12:51 PM
I've started using a free image editing application called Paint .NET . It's good stuff. Not quite ready for professional work, and I still miss some features from PhotoShop, but you can't meet the price and the UI wasn't designed by idiots (like most free software). It was missing PCX file support so I added it. Forum post here: http://paintdotnet.12.forumer.com/viewtopic.php?p=15973 PCX plugin download here: http://www.calormen.com/tmp/PcxFileType.zip
14 comments
Read more
More posts