Showing posts from May, 2007
Show all

Another Snowy May in Calgary 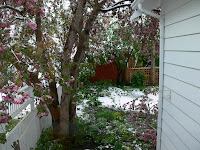 So we're visiting my parents in Calgary for the last time (they're moving to Nova Scotia) In May. And of course, it snowed. Wheeeeee.
Post a Comment
Read more 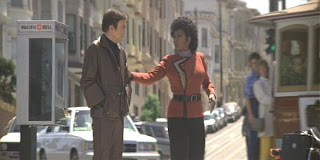 So I'm walking to work today, starting from my house in San Francisco's North Beach neighborhood. I start off on Greenwich and turn a half-block later at the intersection with Columbus ("Nu-cle-ar wessels?") I follow Columbus several blocks. Further on I pass Fresno Alley on Grant (Yellow Pages house - now a bar called "The House") I turn off Columbus just before I get to Pacific ("Double dumb ass on you!") I pass by a newspaper stand and what's the cover story? Two humpback whales are stranded in San Francisco Bay Too geeky not to share.
Post a Comment
Read more

Pirate Party at the Exploratorium 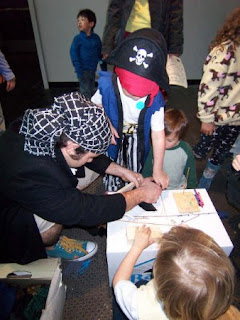 The Exploratorium had a Pirate Party for its annual Member Appreciation Night. We went all out and rented costumes from the ACT , which is conveniently on Market Street. Lots of fun. Fortunately there was free food and drink (beer and wine, can't be a sober pirate). Our costumes were a hit (although there were lots of other great ones there), and we were the subjects of much photography, although Caspian was playing shy. A swaggering gait was natural once we were pirated up. Also entertaining: we got to POFA (mmmm, tasty) by taking the 30 Sansome from our house (it goes right there) dressed in full regalia, which was entertaining for all involved. On the grounds of POFA we ran into some tourists who took their pictures with us. So who knows where we'll pop up on the ol' interweb. Incidentally: ran into Zero Linden (from work) and his family, but we only crossed paths the once which was a shame. It was very crowded.
Post a Comment
Read more

By Joshua Bell - 2:27 PM
This is so very true: Why would you wanna watch TV when you can watch a snail crawl for hours on end? You gotta see an Apple Snail in action. 'nuff said. PS: Yes, my hair is blue.
Post a Comment
Read more
More posts