Showing posts from May, 2006
Show all

By Joshua Bell - 8:12 AM
I added one more feature - the D-Pad (joystick thingy) can now be used to control the speed and text size: Up: Increase font size Down: Decrease font size Left: Speed up scrolling Right: Slow down scrolling Center: Edit the text It's much easier to adjust the settings now. ZIP updated.
Post a Comment
Read more 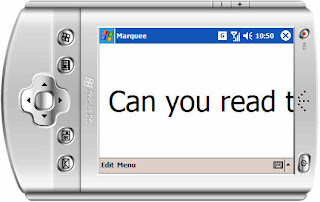 Partly inspired by the "incident" at IKEA (but I had the idea a long time ago) I put together a quick Pocket PC app to "marquee" messages across a room. It simply scrolls a message you specify across the display in a continuous loop, like the MARQUEE tag (IE-only) or the Marquee screen saver in Windows. The display is double-buffered and the UI is optimized for WM5.0: Edit - launches a dialog that lets you edit the text to display Menu - shows the following options Bigger - Increase the text size by 25% Smaller - Decrease the text size by 20% Faster - Increase the scroll speed by 25% Slower - Decrease the scroll speed by 20% (There's no "exit" option per Pocket PC / Windows Mobile UI guidelines - when not showing, the app consumes minimal resources and will be shut down by the OS when memory is needed.) Right now the app always starts up with "Hello, world!" as the text and the text is not persisted to the registry. I'll add tha
Post a Comment
Read more

By Joshua Bell - 1:59 PM
We stopped by IKEA today which was a bad idea - it's a holiday weekend, but we survived and didn't buy too much.  Caspian had waffled on the thought of going into the ball room, and initially balked but once we were passing it at the halfway mark he decided to go for it. Susan signed him up and checked him in, and then we watched him for a bit. I noticed that he still had two toys with him - a toy car key remote and a toy cell phone, both recent acquisitions deemed "not too annoying" by Susan. I was imagining these falling out of his pockets in the ball pit, never to be seen again. We tried to catch his attention and mime "phone" to him, but it didn't work - and the window was soundproof. Then I had a sneaky idea. I pulled out my Pocket PC and wrote a note: "Give your phone to the red lady", then held it up to the glass. He noticed, came over, read it, then immediately called over one of the red-shirted attendants and handed her the phone an
Post a Comment
Read more

Caspian and the Mouse

By Joshua Bell - 1:52 PM
Caspian has a Mac SE in his play area. We just have MacPaint and MacWrite on it, so he can use it productively. Yesterday he was being frustrated by the unresponsive mouse. I opened it up to take a look. The ball was looking particularly sad (it was a black and resiny, definitely looking aged) and Caspian said "Oh, I know.. I'll get the other ball!" As an early toy I'd given Caspian an old dead mechanical Microsoft mouse, sans cord. After a few months it went to the trash heap in the sky, but he kept the rubberized ball since it was fun to roll. He dug it out of one of his toy boxes lickety-split, popped it in the mouse, and as he had predicted the responsiveness was much improved. Score one for the 3-year old.
Post a Comment
Read more

And now for something completely different

By Joshua Bell - 1:44 PM
After nine years, today was my last day at Microsoft. Starting at the end of June I'm off to new adventures in San Francisco.
Post a Comment
Read more

E-mails of the Dead

By Joshua Bell - 7:01 AM
Going through old personal e-mails today I ran across a note from my "Uncle" Roy. Near as anyone can figure, he was my dad's mom's boyfriend. (She doesn't like to label the relationship.) He died unexpectedly a few years ago of a heart attack, probably just when I was getting interesting. He'd introduced me to the Rubik's Cube back in the 1980s, and always had a mathematical puzzle for me. He told me stories of working on early computers - like the time his lab rigged up an oscilloscope as a textual display device, before off-the-rack television tubes came into use for that. Of course, he also claimed that he'd never coded a bug in his life. The e-mails I've got are his request and subsequent "thanks" for a copy of Microsoft Visual C++ (at employee rates), including gripes about how flaky Windows 98 is. The future will only get weirder, of course. My brain made a mental connection to thoughts of reconstructing a personality from fragm
Post a Comment
Read more

Everything I know about GPS

By Joshua Bell - 10:28 AM
When Streets and Trips came out with a bundled GPS receiver I picked one up, ordered a CF Sled so I could use it with my antique Pocket PC and had a whirl. It was fun for a while but then we got a Prius with GPS in the dash, and S&T doesn't have maps of fun places like New Zealand so I haven't used it often. I do want to share one thing I learned when I was first trying it out and shared with co-workers who were having similar issues. ... Are you waiting long enough? I received enlightening information on another e-mail list that it can take up to 5 minutes to get a signal. Roughly, the GPS satellites radiate big data chunks on a less frequent basis and smaller, incremental data chunks more frequently. The GPS receiver must wait until it sees a big data chunk from several satellites before it can do anything. This is called “time to first fix” (TTFF), and can take 2-5 minutes even in completely optimal conditions. With my Dell Axim and the Pharos GPS receiver (using a C
Post a Comment
Read more

By Joshua Bell - 11:01 AM
Okay, it was too good to pass up. I'm now the proud owner of SingularityClock.com with a few caveats: It'll probably take a few days for the DNS records to propagage out to the world The site was built in a few minutes using Office Live. Yay, I'm dogfooding. There's no clock. The site should be simple - pick a starting time, show the clock, and then an RSS feed of events that take us closer to or further from the Singularity, a la http://www.thebulletin.org/doomsday_clock/current_time.htm Of course, there are going to be incredibly few events that would take us further from the Singularity. I guess the Doomsday Clock striking midnight would be one of them. One sign that the Singularity is nigh is that the site will be updated in realtime. :)
Post a Comment
Read more

Is there anything buckytubes can't do?

By Joshua Bell - 10:27 AM
As seen on digg : http://www.physorg.com/news66308334.html Thin films of carbon nanotubes deposited on transparent plastic can also serve as a surface on which cells can grow. And as researchers at the University of Texas Medical Branch at Galveston (UTMB) and Rice University suggest in a paper published in the May issue of the Journal of Nanoscience and Nanotechnology, these nanotube films could potentially serve as an electrical interface between living tissue and prosthetic devices or biomedical instruments. (My wife is always proud of having attended Rice when buckystuff makes the news; Rice has been on the forefront of carbon nanostructure research from the beginning.) Of course, the most intriguing part is the last paragraph of the article: Another avenue Pappas wants to explore is finding out whether nanotubes are sensitive enough to record ongoing electrical activity in cells. "Where we want to get to is a device that can both sense and deliver stimuli to cells for thing
Post a Comment
Read more

Razing and "to volume"

By Joshua Bell - 8:37 AM
Two Caspianisms worth sharing: I have a razor. Therefore, the verb associated with the tool is "to raze". As in: "Dada, your face is scratchy. You need to raze." This morning while Caspian was watching TV, I turned on the espresso machine (self-grinding) and microwave (I'm too impatient to steam the milk). Caspian's request: "Can you volume the TV?" I really like that one. The shortest equivalent we use around the house is "adjust the volume of" which is a bit wordy. I suppose most people would use "turn up" or "turn down" but that's not really our style - it implies that the person to whom the request is being made can't figure out the correct action based on the context.
Post a Comment
Read more

By Joshua Bell - 8:30 AM
For posterity, I should note where Caspian's reading level is right now: - One morning during the trip to NZ in March, he treated me to a reading of The Paper Bag Princess . I think he'd had Susan read it to him one time before. I was only half-awake so I couldn't have helped if I wanted to, and he skipped a page, and he made one mistake where the grammar got complicated, but otherwise it was perfect. - We picked up a copy of The Complete Adventures of the Mole Sisters , and Caspian now compulsively reads it in the car. Last Saturday we let Su sleep in and we drove around doing some shopping. Over the course of the trip he read it out loud, front to back.
Post a Comment
Read more

Nearby Galaxies and Stars

By Joshua Bell - 10:25 AM
Note to self: One cool thing about staying several days in Queenstown is that we finally had (1) clear skies, (2) no skyglow, and (3) enough energy to stay out after dark a few days in a row. We took blankets out to the lake shore right in front of the hotel. The view at night was really amazing, since there is no build-up on the far side of the lake. So apart from having a mountain blocking part of your view, you're not having to fight with city lights if you have something like a tree behind you. I was able to point out the Milky Way to Caspian - I haven't seen that in a few years - and got to see the Large and Small Magellanic Clouds for the first time. Not all that impressive to look at unless you know what they are. Then it's humbling. We'd managed to pick up a map of the southern skies after a few mishaps - Su accidentally left the first one she bought at the store thanks to a little distraction, and on the second attempt she had downloaded a map of the norther
Post a Comment
Read more
More posts